September is National Ovarian Cancer Awareness Month and September 1 marks the start to 30 days of teal. The month will include gatherings, celebrations and fundraisers across the nation. It’s a reminder to educate ourselves and be diligent with our health. Ovarian Cancer whispers during the early stages so it’s important to listen to the subtle signs.

My sister was diagnosed when she was in her early thirties. She fought the battle for over two years and passed away when she was just thirty-four. Ovarian Cancer Awareness Month marks the a time to educate others and is a reminder the anniversary of her passing is October 4. It’s the season of remembrance and gratitude for the short time we had together. She always said if her story could help another woman detect this disease earlier than she found hers, then her fight was worth it. 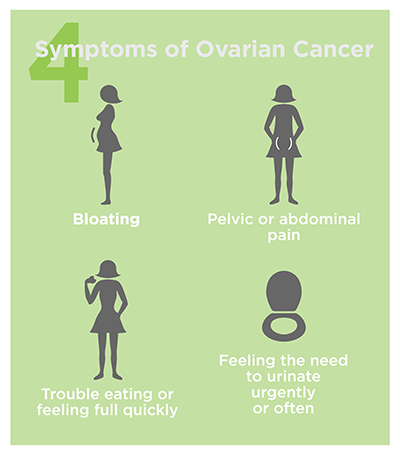 Ovarian cancer is difficult to detect, especially, in the early stages.

This is partly due to the fact that these two small, almond-shaped organs are deep within the abdominal cavity, one on each side of the uterus.

These are some of the potential signs and symptoms of ovarian cancer:

Other symptoms of ovarian cancer can include:

If symptoms persist for more than two weeks, see your physician.

Persistence of Symptoms
When the symptoms are persistent, when they do not resolve with normal interventions (like diet change, exercise, laxatives, rest) it is imperative for a woman to see her doctor. Persistence of symptoms is key. Because these signs and symptoms of ovarian cancer have been described as vague or silent, only around 19% of ovarian cancer is found in the early stages. Symptoms typically occur in advanced stages when tumor growth creates pressure on the bladder and rectum, and fluid begins to form.

Every woman should undergo a regular rectal and vaginal pelvic examination. If an irregularity of the ovary is found, alternatives to evaluation include transvaginal sonography and/or tumor markers. The most common tumor marker is a blood test called the CA-125.

Remember, it whispers so listen!